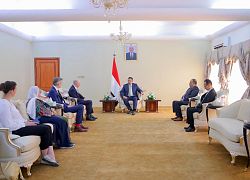 ADEN-SABA
Prime Ministe Dr. Ma’een Abdulmalik received today, Monday, in the temporary capital Aden the Ambassador of the UK to the Republic of Yemen Richard Oppenheim and his accompanying delegation.

During the meeting a range of topical issues were discussed including the latest developments in the Yemeni national scene, bilateral ties between the two countries, underway international efforts to extend the humanitarian truce and the British support for the Yemeni government to achieve the economic stability and food security.

The Prime Minister reiterated the government’s keenness to maintain the truce in case that its articles are fully implemented by both parties, calling on the international community to mount pressures upon Houthi militia to come peace that is based on the agreed on terms of peace references.

The British Ambassador praised the Yemeni government’s commitment to maintain the humanitarian truce in the framework of the UN-led efforts to make peace in Yemen.

He also confirmed the UK’s support for the government’s reforms and efforts to allay the Yemeni peoples’ suffering.