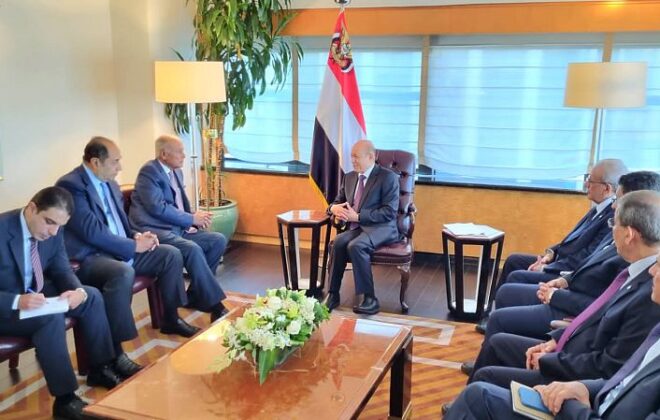 NEW YORK- SABA
President of the Presidential Leadership Council Rashad al-Alimi received Friday in his residence here the Secretary General of the Arab League Ahmad Abu al-Gheit on the sidelines of the activities of the UN General Assembly.

President al-Alimi praised the role of the Arab League and its general assembly in supporting the issue of the Yemeni people and its advocacy in all regional and international forums.

The meeting reviewed latest developments in Yemen and the track of the humanitarian truce and regional and international efforts to renew it, in addition to stopping Houthi militia’s violations.

For his part, the Secretary General of AL confirmed the league’s firm support towards Yemen, its unity, security and stability and pushing forward of peace efforts to alleviate humanitarian suffering of Yemeni people.