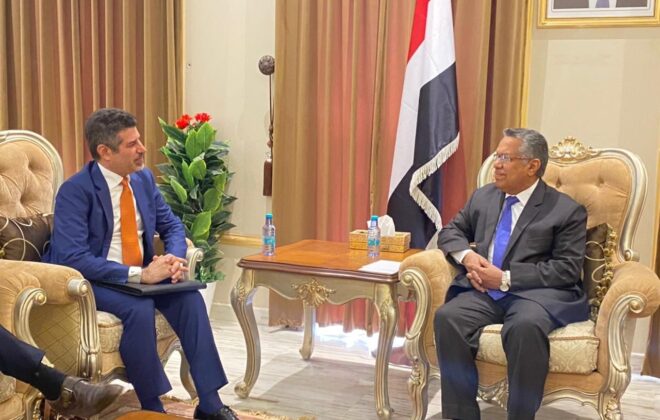 They discussed developments about the UN-sponsored truce.

Bin Dagher stressed that it is very necessary for Houthi militias to fulfill its obligations about lifting Taiz blockade which comes under the militiamen’s attack on daily basis that further exacerbating the population suffering who have been chafed under the yoke of strangulation besiege for more than seven years.

He stated that lifting the blockade and open all passageways to Taiz is a priority for the legitimate government in Yemen.

The Speaker of Shura Council pointed out to the continuous breaches of the truce by Houthi militia.

He called on Yemen’s friends who are opposing the Houthi militia’s coup, backing the legitimate government to ramp up pressures upon the Houthis and Iran to accept Yemeni-Yemeni negotiations based on the agreed on peace references in order to achieve peace and maintain Yemen united, secure and stable.

The American Ambassador confirmed the US administration’s support for peace process in Yemen, open the routes to and from Taiz, respect the truce’s provisions and go on supporting the efforts to make peace in Yemen.