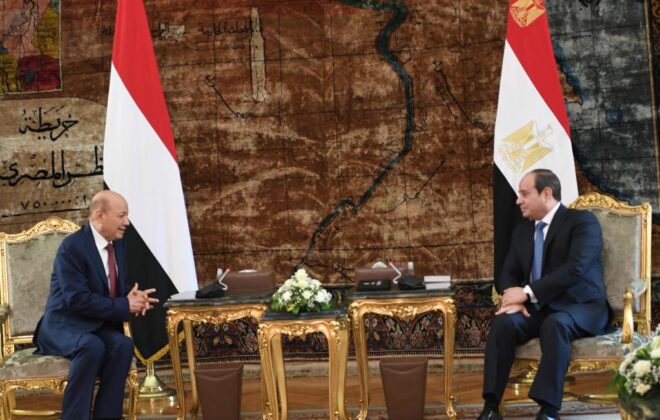 At the beginning of the meeting, President Abdel Fattah Al-Sisi welcomed the President and his accompanying delegation of members of the Leadership Council, Aidarous Al-Zubaidi, Sultan Al-Arada, Abdullah Al-Alimi, Othman Majali, and Faraj Al-Bahsani.

The talks touched on developments in the Yemeni issue and the security of the region, in light of the increasing hostile activities of the Houthi militia backed by the Iranian regime.

The two sides also reviewed areas of cooperation between the two countries, opportunities to benefit from the Egyptian experience in various fields, and security coordination to face common challenges, including ways to avoid an imminent environmental disaster from the possibility of the collapse of the Safer oil tanker.

After the talks, Presidents Al-Alimi and Al-Sisi held a press conference on the results of the meetings and the two countries’ positions on the current developments on the Yemeni and regional arena.

His Excellency President Rashad Al-Alimi expressed his deep appreciation to President Al-Sisi, and the people of Egypt, for their courageous humanitarian and political stances on the side of the Yemeni people during the years of war triggered by the Houthi coup militias. He said that this is not strange to the sisterly Egypt, which has always been on the side of the Yemenis, in defense of the republican system, the rebuilding of state institutions and its renaissance after the revolution in 1962.

He added, “Egypt stands with us today as well within the framework of the coalition that supports constitutional legitimacy with the aim of restoring the state and overthrowing the Iranian-backed coup. It also embraces hundreds of thousands of our sons who are stranded in their livelihoods at home as the coup group continues its brutal campaign, and turns Yemen into a hostile base” to threaten the security of neighboring countries and the entire region.”

The Chairman of the Leadership Council praised the Egyptian urban renaissance, and the people’s support for their political leadership, represented by his brother, President Abdel Fattah Al-Sisi. The President said that he spoke to his Egyptian counterpart about the developments in the Yemeni file, and the efforts made by the Yemeni Presidential Leadership Council to improve the situation in the liberated governorates, especially at the economic and service levels, and to unify the army and security institutions, and what these reforms require in terms of support from the brothers in the Arab Republic of Egypt.

The President affirmed the continuation of the positive engagement of the Leadership Council and the legitimate government with all peace endeavors, in coordination with the brothers in the Coalition to Support Legitimacy led by the Kingdom of Saudi Arabia and the United Arab Emirates, “which have never failed to provide all forms of support and initiatives in order to end the suffering of the Yemeni people.” He pointed out that his talks with his brother, President Abdel Fattah El-Sisi, and Egyptian officials, touched upon the risks to the security and safety of international navigation, in addition to what the collapse of the tanker Safer could represent in terms of an environmental disaster that will include Yemen, Egypt and all countries bordering the Red Sea.

The President told reporters that the talks also dealt with opportunities to strengthen relations and benefit from the leading Egyptian experience in the services sector, including education, health and reconstruction, and additional facilities for Yemeni nationals residing and arriving in the sisterly land of Egypt, pointing out that there are a number of memoranda of understanding that will be signed.