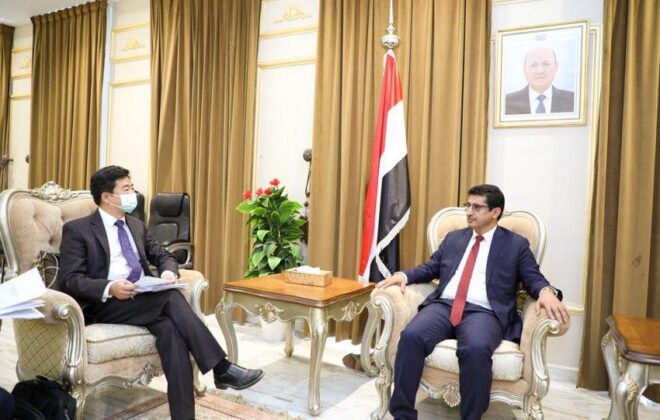 Riyadh – Saba
Deputy Foreign Minister for Political Affairs, Dr. Mansour Bajjash, received today the Chargé d’Affaires of the Chinese Embassy to Yemen Shao Zheng, and discussed with him bilateral relations between the two countries, ways of developing them, and coordinating positions on issues of common concern.

Bajjash reviewed the latest developments in Yemen and the government’s efforts to extend the truce and its welcome to all efforts for peace and a political solution.

He pointed to what the Houthi militia had done in thwarting the efforts to extend the truce, and what this reflects in its indifference to the suffering of the Yemeni people and the stability of the region and its lack of seriousness in moving forward towards peace and its endeavor to return Yemen to a state of war and even expand its scope to include the threat to navigation at the entrance to the Red Sea and international energy supplies in Yemen and the region, pointing to the importance of the international community fulfilling its duties and working to designate the militia as an international terrorist organization.

For his part, Mr. Zheng affirmed his country’s support for the government and everything that guarantees the security and stability of Yemen and achieves the aspirations of the Yemeni people and supports the international efforts being made to find a comprehensive political solution to end the Yemeni crisis.