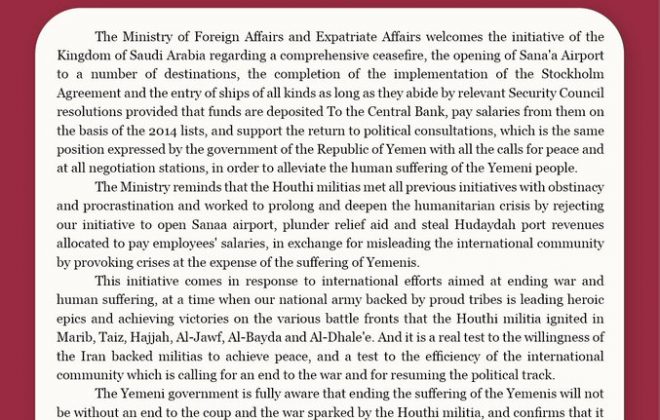 Statement of the Ministry of Foreign Affairs and Expatriates to welcome the initiative of the Kingdom of Saudi Arabia March 22, 2021

The Ministry of Foreign Affairs and Expatriate Affairs welcomes the initiative of the Kingdom of Saudi Arabia regarding a comprehensive ceasefire, the opening of Sana’a Airport to a number of destinations, the completion of the implementation of the Stockholm Agreement and the entry of ships of all kinds as long as they abide by relevant Security Council resolutions provided that funds are deposited To the Central Bank, pay salaries from them on the basis of the 2014 lists, and support the return to political consultations, which is the same position expressed by the government of the Republic of Yemen with all the calls for peace and at all negotiation stations, in order to alleviate the human suffering of the Yemeni people.

The Ministry reminds that the Houthi militias met all previous initiatives with obstinacy and procrastination and worked to prolong and deepen the humanitarian crisis by rejecting our initiative to open Sanaa airport, plunder relief aid and steal Hudaydah port revenues allocated to pay employees’ salaries, in exchange for misleading the international community by provoking crises at the expense of the suffering of Yemenis.

This initiative comes in response to international efforts aimed at ending war and human suffering, at a time when our national army backed by proud tribes is leading heroic epics and achieving victories on the various battle fronts that the Houthi militia ignited in Marib, Taiz, Hajjah, Al-Jawf, Al-Bayda and Al-Dhale’e. And it is a real test to the willingness of the Iran backed militias to achieve peace, and a test to the efficiency of the international community which is calling for an end to the war and for resuming the political track.

The Yemeni government is fully aware that ending the suffering of the Yemenis will not be without an end to the coup and the war sparked by the Houthi militia, and confirms that it will remain as it was with all efforts aimed at achieving peace in a way that guarantees ending the coup, restoring the state and rejecting the destructive Iranian project in Yemen in accordance with the three terms of reference, on top of which is the Security Council Resolution No. 2216.

The Ministry renews its thanks and appreciation to the Kingdom of Saudi Arabia and its wise leadership for all that they had presented and offered to Yemen politically, economically and militarily, with whom we stand together in front of the destructive and expansionist Iranian project in the region.