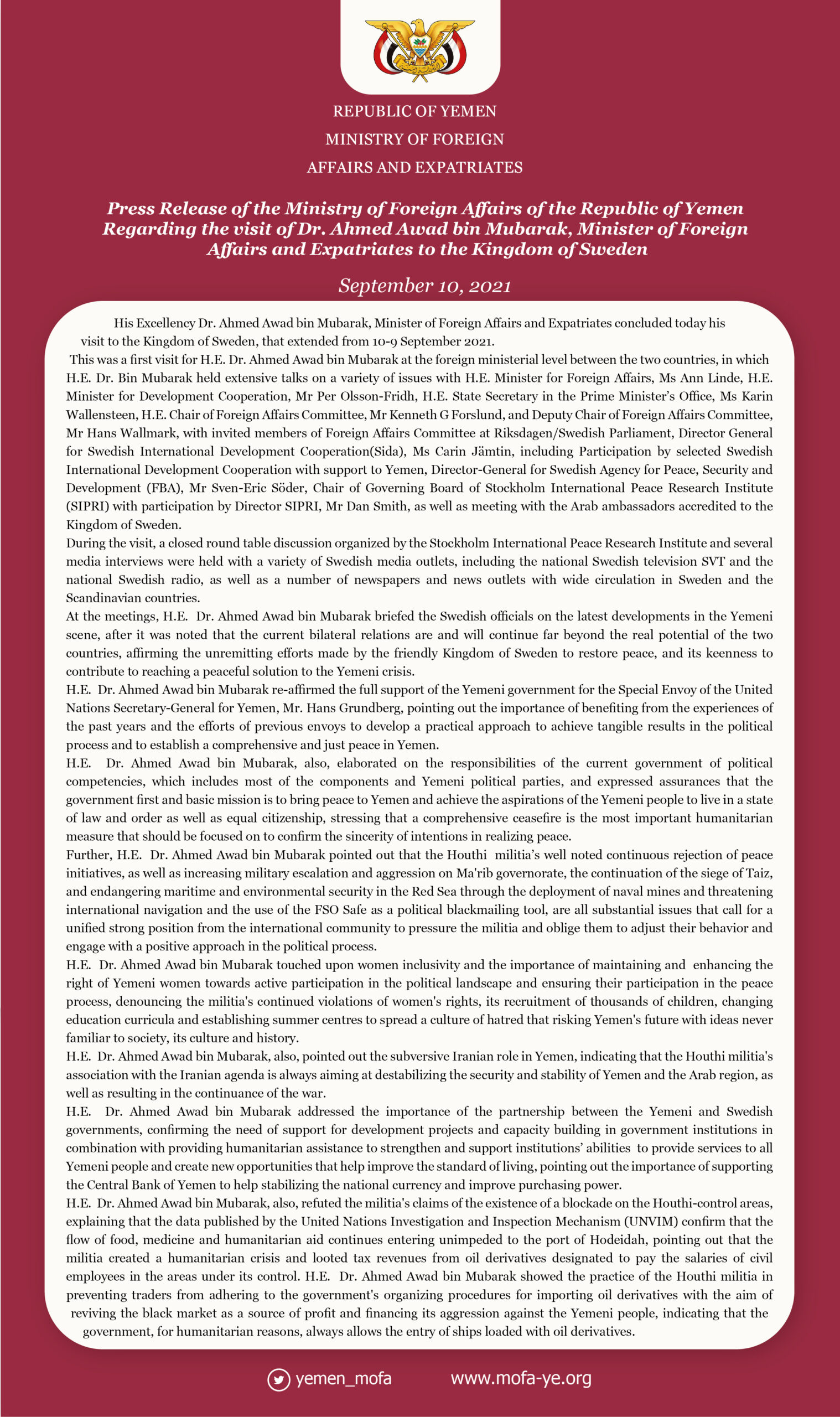 His Excellency Dr. Ahmed Awad bin Mubarak, Minister of Foreign Affairs and Expatriates concluded today his visit to the Kingdom of Sweden, that extended from 9-10 September 2021.

During the visit, a closed round table discussion organized by the Stockholm International Peace Research Institute and several media interviews were held with a variety of Swedish media outlets, including the national Swedish television SVT and the national Swedish radio, as well as a number of newspapers and news outlets with wide circulation in Sweden and the Scandinavian countries.

At the meetings, H.E. Dr. Ahmed Awad bin Mubarak briefed the Swedish officials on the latest developments in the Yemeni scene, after it was noted that the current bilateral relations are and will continue far beyond the real potential of the two countries, affirming the unremitting efforts made by the friendly Kingdom of Sweden to restore peace, and its keenness to contribute to reaching a peaceful solution to the Yemeni crisis.

H.E. Dr. Ahmed Awad bin Mubarak re-affirmed the full support of the Yemeni government for the Special Envoy of the United Nations Secretary-General for Yemen, Mr. Hans Grundberg, pointing out the importance of benefiting from the experiences of the past years and the efforts of previous envoys to develop a practical approach to achieve tangible results in the political process and to establish a comprehensive and just peace in Yemen.

H.E. Dr. Ahmed Awad bin Mubarak, also, elaborated on the responsibilities of the current government of political competencies, which includes most of the components and Yemeni political parties, and expressed assurances that the government first and basic mission is to bring peace to Yemen and achieve the aspirations of the Yemeni people to live in a state of law and order as well as equal citizenship, stressing that a comprehensive ceasefire is the most important humanitarian measure that should be focused on to confirm the sincerity of intentions in realizing peace.

Further, H.E. Dr. Ahmed Awad bin Mubarak pointed out that the Houthi militia’s well noted continuous rejection of peace initiatives, as well as increasing military escalation and aggression on Ma’rib governorate, the continuation of the siege of Taiz, and endangering maritime and environmental security in the Red Sea through the deployment of naval mines and threatening international navigation and the use of the FSO Safe as a political blackmailing tool, are all substantial issues that call for a unified strong position from the international community to pressure the militia and oblige them to adjust their behavior and engage with a positive approach in the political process.

H.E. Dr. Ahmed Awad bin Mubarak touched upon women inclusivity and the importance of maintaining and enhancing the right of Yemeni women towards active participation in the political landscape and ensuring their participation in the peace process, denouncing the militia’s continued violations of women’s rights, its recruitment of thousands of children, changing education curricula and establishing summer centres to spread a culture of hatred that risking Yemen’s future with ideas never familiar to society, its culture and history.

H.E. Dr. Ahmed Awad bin Mubarak, also, pointed out the subversive Iranian role in Yemen, indicating that the Houthi militia’s association with the Iranian agenda is always aiming at destabilizing the security and stability of Yemen and the Arab region, as well as resulting in the continuance of the war.

H.E. Dr. Ahmed Awad bin Mubarak addressed the importance of the partnership between the Yemeni and Swedish governments, confirming the need of support for development projects and capacity building in government institutions in combination with providing humanitarian assistance to strengthen and support institutions’ abilities to provide services to all Yemeni people and create new opportunities that help improve the standard of living, pointing out the importance of supporting the Central Bank of Yemen to help stabilizing the national currency and improve purchasing power.

H.E. Dr. Ahmed Awad bin Mubarak, also, refuted the militia’s claims of the existence of a blockade on the Houthi-control areas, explaining that the data published by the United Nations Investigation and Inspection Mechanism (UNVIM) confirm that the flow of food, medicine and humanitarian aid continues entering unimpeded to the port of Hodeidah, pointing out that the militia created a humanitarian crisis and looted tax revenues from oil derivatives designated to pay the salaries of civil employees in the areas under its control. H.E. Dr. Ahmed Awad bin Mubarak showed the practice of the Houthi militia in preventing traders from adhering to the government’s organizing procedures for importing oil derivatives with the aim of reviving the black market as a source of profit and financing its aggression against the Yemeni people, indicating that the government, for humanitarian reasons, always allows the entry of ships loaded with oil derivatives. 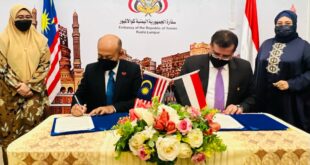 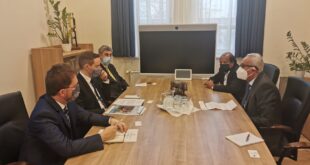