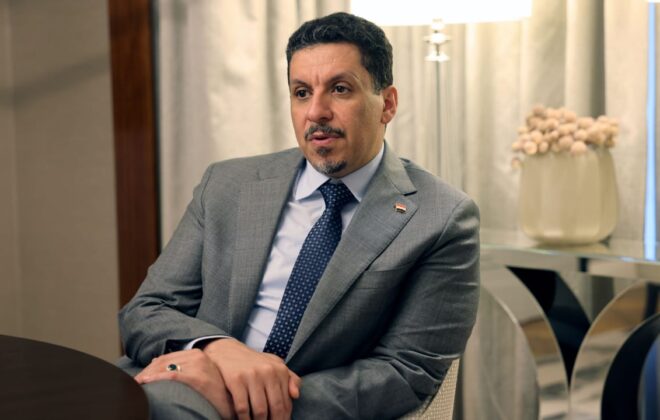 The Minister of Foreign Affairs and Expatriates, Dr. Ahmed Awad BinMubarak, held an extensive meeting with the heads of Yemeni diplomatic missions in Europe through visual communication technology to discuss developments in Yemen and determine the diplomatic performance of the missions.

The FM elaborated on the visits of delegations and international officials to the provisional capital – Aden, saying that these visits convey messages of support and solidarity for the Yemeni government and its presence in Aden, and explore the economic support that can be provided to confront the economic challenges.

Bin Mubarak pointed out that there is an international consensus on the need for a comprehensive ceasefire in Yemen. He stated that the Houthi militia continues its aggression and military mobilization in all regions and rejects all diplomatic efforts aimed at a peaceful resolution of the conflict in accordance with the three references, saying that the militia has intensified its attacks on civilians in different regions in Yemen, particularly in Ma’rib governorate.

Bin Mubarak explained that the state of illusion the militia is in and its belief in the possibility of controlling Marib will dissipate and pale before the steadfastness of the National Army.
He pointed to the cohesion and cohesion between the National Army and the tribesmen in defending the province and repelling the Houthi aggression, as well as the political leadership and the government with all its institutions and their full support for the struggle to defend Marib.

The FM referred to the rapprochement between the forces opposing the Iranian project in Yemen and its tool, the Houthi, as well as the positive messages from all parties to heal the rift and cohesion against the Iranian project and free the Yemeni state from the clutches of the clerical Imamate project that the Houthi militia wants to impose on Yemeni society.

The FM praised the missions’ efforts in defending Yemen’s just cause in the face of the coup by Houthi militias and the restoration of the state, pointing to the continued coordination and intensification of work to shed light on Iran’s subversive role in Yemen and counter false narratives about the Yemeni crisis.

The meeting included discussions and interventions by the Heads of Mission and an exchange of views on the situation in Yemen and the nature of the diplomatic activities required at this stage.

السابق Bin Mubarak to “Al-Jazeera”: Al-Houthi militia fantasizes about militarily ending the battle of Ma’rib
اللاحق Bin Mubarak discusses with the head of the Red Cross mission the organization’s programs in Yemen