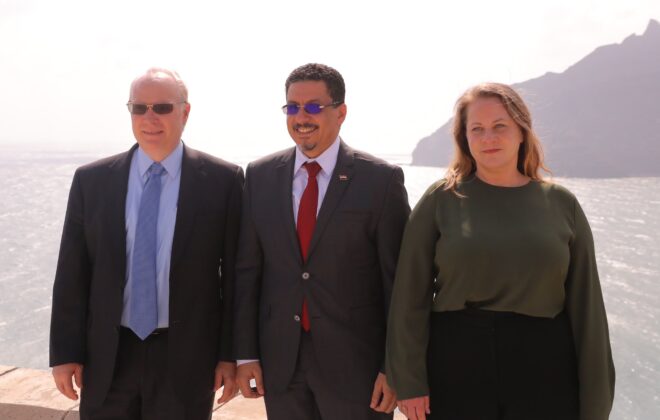 The Foreign Minister, Dr. Ahmed Awad bin Mubarak, stated in an interview with Al-Jazeera: that the US envoy carried a message of support and solidarity for the Yemeni government and its presence in the capital, Aden, and that the conversation with the American envoy focused on what could be presented to the government, especially in the economic sphere, and expressed this clearly. On the U.S. government’s condemnation of the Houthi militia’s ongoing attack on Ma’rib governorate and why this attack threatens the peace process in Yemen, considering that the Houthi militia’s ongoing aggression reflects the Houthi militia’s lack of positive interaction with peace initiatives.

His Excellency the Secretary added that there is an affirmation by the U.S. government to use all its diplomatic means and threaten sanctions if the Houthis are intransigent, and that there is a serious and responsible discussion not to be silent that the Houthis continue to obstruct peace efforts in Yemen and that the Houthis continue to rely on a military solution in Marib, which is illusory compared to what has been achieved. Some military advances in some areas will whet the Houthi militia’s appetite for further aggression against Yemen.

His Excellency bin Mubarak pointed out that there is great international concern and awareness that the continuation of Houthi military operations in Marib will have devastating and disastrous consequences not only for Yemen but for all countries in the region and for international security and stability. His Excellency said that the visit of the American envoy is the fourth visit of international officials to the capital Aden, preceded by visits of European delegations, the humanitarian aid coordinator in Yemen and the envoy of UN. He stressed that the visits will continue due to the great international interest in fully supporting the legitimate Yemeni government, supporting its presence in Aden and emphasizing the implementation of the Riyadh agreement and the completion of its elements.

The conversation with the American envoy focused on the main challenges of what is happening in Marib governorate and the influx of a large number of displaced and forcibly displaced people, estimated at more than 54,000 civilians in the last two months, due to the continuation of the Houthi aggression and the illegal use of ballistic missiles, various weapons and military drones by the Houthi militia. Previously, civilians, safe areas and schools had been attacked. The silence of the international community had a negative impact on the continuation of the barbaric attacks of the Houthi militia.

His Excellency pointed out that it was necessary and important to defend Ma’rib and support the Yemeni Government in providing services to all the Yemeni people, not only to the liberated governorates, but to the whole of Yemen, led by the Kingdom of Saudi Arabia.

Bin Mubarak stressed that Ma’rib was able to break the Houthi attack and torpedo their bet on their downfall, despite the intensity and persistence of the Houthi militia’s aggression against them and the influx of Iranian military support in its various forms. His Excellency bin Mubarak said that over the past two days, international reports have indicated that shipments of high-tech weapons have arrived from Iran with machinery from Western and Asian countries that the Houthi militia has used to bomb civilian facilities in Saudi Arabia or Yemen. He added that the US is committed to using all available diplomatic, political and economic means to strengthen the Yemeni government and bring peace.