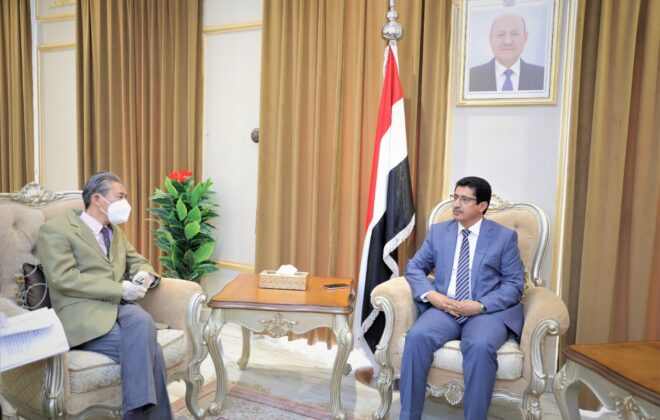 Riyadh – Saba
Deputy Foreign Minister for Political Affairs, Dr. Mansour Bagash, discussed with Chinese Ambassador to Yemen Kang Yong the bilateral relations between the two countries and ways to enhance them and coordinate positions on issues of common concern in international forums.

During the meeting, Bagash touched on the latest developments in the political situation in Yemen, including the transfer of the authority of former President Abd Rabbuh Mansour Hadi to the Presidential Council headed by Dr. Rashad Al-Alimi, indicating that this council will be the beginning of a new phase working to achieve security and stability, normalize the situation and lift the suffering of the Yemeni people.

For his part, the Chinese ambassador blessed the truce reached by the United Nations in Yemen, stressing his country’s firm stance towards the legitimate government, Yemen’s unity and territorial integrity, non-interference in its internal affairs, and its support for all efforts made to achieve peace and restore security and stability in Yemen and the region.