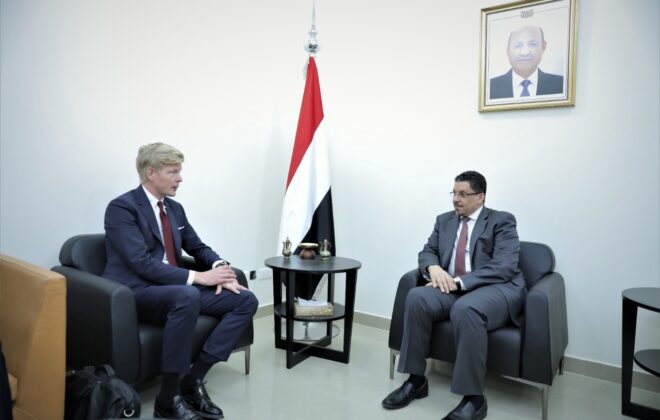 FM underscores the need to open routes to the besieged Taiz

The session intended to discuss the developments in the Yemeni arena and how to maintain the UN’s sponsored humanitarian truce with its different tracks, particularly to open the roads to the besieged city of Taiz.

Bin Mubarak stressed that it is very necessary to open the passageways and routes to the city of Taiz whose population have been chafed under the yoke of chocking blockade for seven years.

He stated that the opening of Taiz routes was stipulated as one of the truce’s priorities and a humanitarian need to alleviate the suffering of the Taizians.

The Minister touched upon the perils of Houthi militias’ violations of the truce, affirming the government’s keenness to maintain it as a window of hope of peace. He stressed that it is important to prevent the Houthis from exploiting the truce to mobilize their forces and carry out military actions risking the temporary cease-fire.

Bin Mubarak pointed out to the government’s role in enabling the oil derivatives ships to access Hodiedah seaports, citing the underway efforts to operate airway flights from and to Sana’a airport in coordination with the authorities in the specified countries to receive the flights.

The UN’s envoy stated that he is engaged in the efforts with the all parties to maintain the truce and to explore the means to reach a sustainable peace in Yemen. He urged all parties to keep their commitments to observe the truce in order to be a turning point to toward the peace.