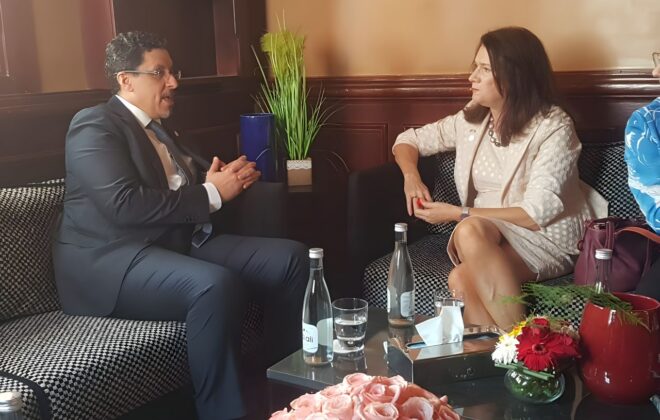 Rabat – Saba
Yemen’s Foreign Minister Ahmed Awad bin Mubarak, met today with his Swedish counterpart Ann Linde  on the sidelines of his participation in the ministerial meeting of the Global Conference to Defeat ISIS, held in the Moroccan city of Marrakesh.

During the meeting, Mubarak expressed the Yemeni government’s gratitude for the role played by the Kingdom of Sweden in pushing for peace, and its support for the legitimate government.He referred to the latest developments in our country, especially those related to the UN brokered truce, stressing the Yemeni government’s adherence and commitment to everything that would lead to alleviating human suffering and achieving a just and comprehensive peace.

He reviewed the initiatives and solutions presented by the Yemeni government in order to open Sana’a airport, conduct the first flights to the Kingdom of Jordan, and lift the siege on the city of Taiz, in light of the continued truce violations by the Houthi militia who reject all mechanisms aimed at opening Sana’a airport and ending the militia’s siege on the city of Taiz, and the militia’s insistence to use the suffering of the Yemeni people as a bargaining chip.