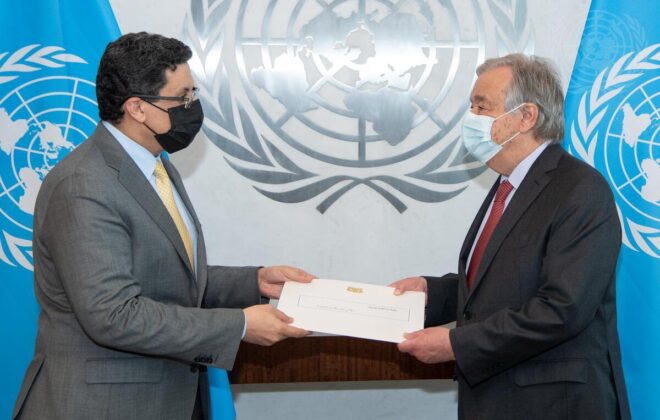 Foreign Minister hands over a message to UN Secretary-General

New York – Saba
Foreign Minister, Dr. Ahmed bin Mubarak, delivered a written message from His Excellency the President of the Presidential Leadership Council, Dr. Rashad Al-Alimi, to the Secretary-General of the United Nations, reiterating the commitment of the Yemeni government to support the peace process led by the United Nations, and to provide all facilities for the success of the truce and alleviating the suffering of all Yemenis.

The Minister, during his meeting today with the Secretary-General of the United Nations, Antonio Guterres, said that the message of His Excellency the President of the Presidential Council calls on the United Nations to exert all pressures to complete the implementation of all provisions of the agreement, especially lifting the siege on Taiz Governorate, opening crossings and roads, facilitating the movement of citizens, as well as allocating Hodeidah port revenues to paying the salaries of public employees. Bin Mubarak also reviewed the efforts and concessions made by the Yemeni government in order to implement its commitments and make the truce agreement a success.. He said that on the other hand, the Houthi militias still avoid fulfilling their obligations, which threatens to destabilize this truce.

He stressed the importance of the United Nations exercising sufficient pressure on the Houthis to implement their parts especially lifting the siege on Taiz city. On the other hand, Bin Mubarak shed light on the human tragedy that has been and continues to be caused by the millions of anti-personnel landmines planted by the Houthi militias in various parts of Yemen.

He asserted that the victims of these mines are only civilians, especially women and children, .