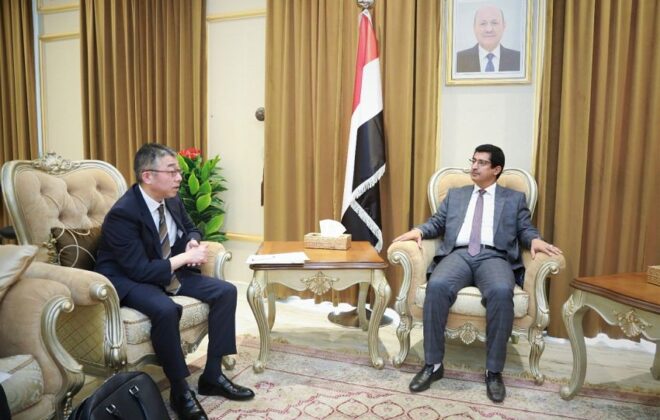 Aspects of Yemeni-Japanese bilateral ties and latest developments in Yemen was key focus of the discussions.

Baggash praised Japan’s support for Yemen in different fields, deeply appreciating the Japanese significant contribution to the relief and humanitarian actions in Yemen, citing the 10 million USD grant provided recently through the World Food Program (WFP) to mitigate food crisis in our country.

He also detailed the Japanese diplomat on the latest political developments in Yemen, affirming that the Presidential Leadership Council (PLC) has been working to establish peace in Yemen through the UN-led peace process.

The Japanese diplomat has confirmed his country’s support for the PLC and Yemen’s unity, stability and security.

He also confirmed Japan’s support for the extension of the UN-sponsored truce to reach a comprehensive peace in Yemen.

Najoca reiterated his country’s commitment to keep on contributing to the humanitarian and developmental efforts in Yemen.