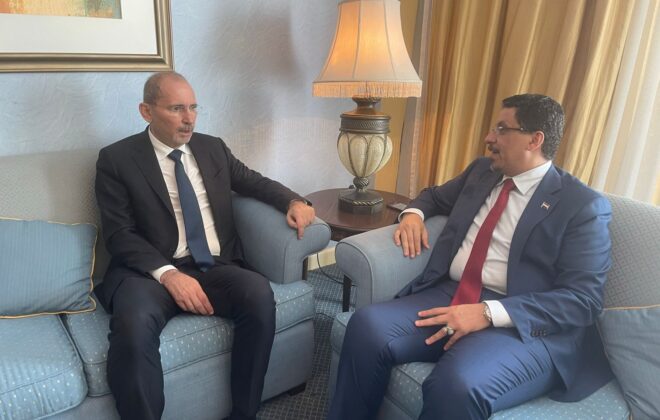 BEIRUT-SABA
Minister of Foreign and Expatriate Affairs Ahmed Awadh BinMubarak met Saturday, in the light of his participation in the Consultative Meeting of Arab Foreign Ministers here, with Foreign Minister of Jordan Ayman al-Safadi.

He pointed out to latest developments in Yemen on the light of extending the UN Truce and its chance of realizing inclusive and just peace, noting to Houthi militia’s continuous siege on Taiz and its rejection to open roads to the city, a matter represents real challenge to continuity of the truce.

He expressed Yemen’s appreciation to Jordan for its role it played in holding Yemeni-Yemeni talks and its response to the government of Yemen’s demand of allowing flights from and to Sana’a Airport.

For his part, the Jordanian foreign minister renewed his country’s firm position to the government of Yemen and its support to all efforts for alleviating suffering of Yemeni people, reaching to peace that protects Yemen, its unity and security.