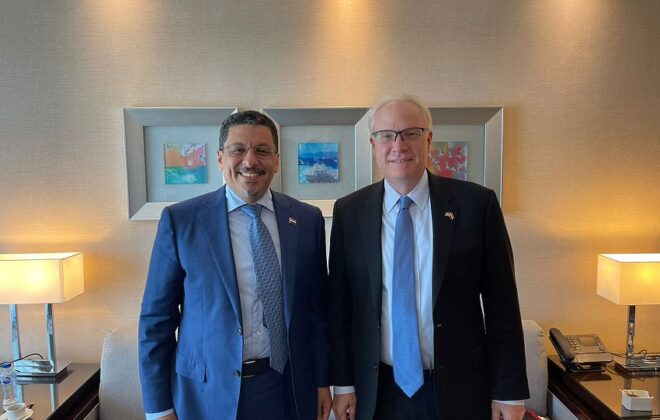 FM meets US envoy to Yemen

Jeddah – Saba
Foreign Minister Dr. Ahmed Awad bin Mubarak, met today with the US envoy to Yemen, Tim Linder King, and discussed with him developments in Yemen and efforts to achieve peace in Yemen.

During the meeting, the Foreign Minister affirmed the Presidential Leadership Council’s support for all efforts aimed at achieving peace in Yemen and the government’s openness to a political solution according to the three references.

He also affirmed the government’s readiness to deal positively with everything that would alleviate the humanitarian consequences of the citizens in all regions of Yemen without compromising one humanitarian for another, stressing at the same time that the issue of Houthi siege on Taiz city is one of the major humanitarian issues that must be dealt with and resolved before moving to any other topics.

Bin Mubarak said that the Houthi militia’s negative handle this issue and are stubborn in evading lifting the siege on millions of civilians, which confirms the militia’s intransigence and lack of readiness for peace.

He pointed to the importance of stopping the militia’s abuse of billions of riyals worth of revenues from the port of Hodeidah and obligating the militia to direct those resources to pay the salaries of public employees in the areas still under the militia’s control.

For his part, the US envoy affirmed his country’s support for the Presidential Council and its commitment to help Yemen get out of the crisis, establish peace, and stand by its unity, sovereignty and territorial integrity.