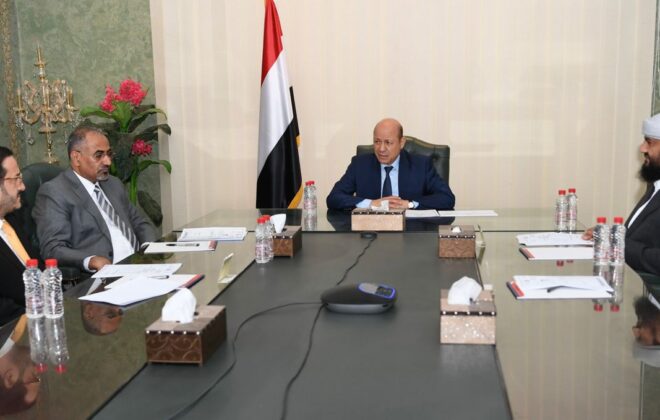 Aden – Saba
The Presidential Leadership Council held a meeting chaired by His Excellency President Dr. Rashad Muhammad Al-Alimi, Chairman of the Council, in which he discussed the latest developments in the country, the developments of the regional and international diplomatic movement on the Yemeni issue, in addition to the results of the recent presidential tour in the region.

The meeting was held in the presence of members of the Council, Aidarous Al-Zubaidi, Abdul Rahman Al-Mahrami, and Othman Majali, and through the visual communication department, Sultan Al-Arada, Tariq Saleh, and Dr. Abdullah Al-Alimi, while the council member, Faraj Al-Bahsani, was absent with an excuse.

The Council heard from the Chairman of the Presidential Leadership Council, a report on the results of the last presidential tour in the region, which included Kuwait, Bahrain, Egypt and Qatar, in addition to developments in the urgent path to absorb and use the pledges of the brothers in the Kingdom of Saudi Arabia and the United Arab Emirates.

The Presidential Leadership Council also listened to a briefing regarding the approval of the brothers in the Kingdom of Saudi Arabia for the grant of oil derivatives to generate electricity in the amount of $200 million, as well as the royal approval to contract with a company to manage and operate the Aden General Hospital at the expense of the Kingdom, expressing thanks for this continuous support.

In this regard, the Council assigned the ministries of Foreign Affairs, and Planning and International Cooperation, to prepare a program to follow up on the implementation of the results of visits to those sisterly countries, and to speed up the absorption of pledges and declared economic aid.

In the meeting, which was attended by the Foreign Minister, Dr. Ahmed bin Mubarak, the President also presented the results of his consultations on the sides of the Arab-American summits hosted this week in the Saudi city of Jeddah, including welcoming the consistent international position on the terms of reference for a comprehensive solution in Yemen, and the pressures required to compel the Houthi militias to submit to the national and international will.

The Council studied an assessment of the humanitarian truce, and the extensive violations of it by the Iranian-backed Houthi militia, which confirms its disavowal of all its obligations under the UN declaration, especially those related to opening the crossings of Taiz and other governorates, the non-disbursement of employee salaries from the revenues of Hodeida seaports, and the delay in the suffering of prisoners and efforts, and the procrastination in responding to preventing the collapse of the Safer oil tanker, which threatens a major environmental disaster.

The Council warned against the militia’s continued violations of the humanitarian truce, and the international community’s failure to condemn it, and to oblige it to implement all the truce agreement’s provisions.

The Council renewed its keenness to support the efforts of the United Nations, and all regional and international endeavors request to bring peace and stability to Yemen, and to achieve the aspirations of its people in restoring state institutions, and consolidating their affiliation with the Arab fold.