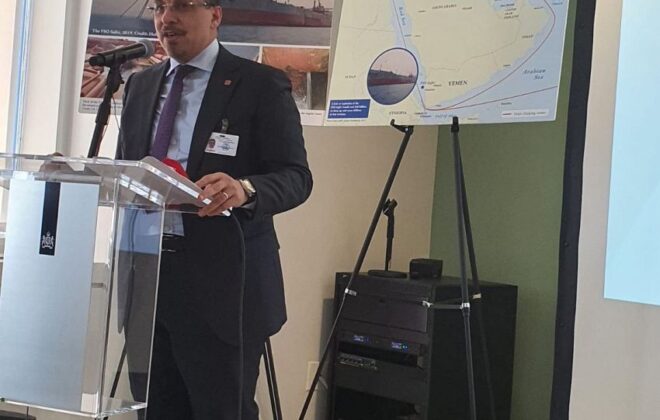 New York – Saba
Foreign Minister Dr. Ahmed Awad bin Mubarak said, “It would have been possible to address the situation of the Safer tanker years ago and at a lower cost, had it not been for the Houthi militia’s continuous obstruction and the practice of political blackmail for the region and the international community.”

Minister bin Mubarak added, during his participation today in the meeting on the Safer tanker, held in New York, jointly organized by the United States, the Netherlands, Germany and the United Nations, that the Yemeni government has made, and still is, continuous and intense efforts since 2016 to avoid a potential disaster as part of its responsibility as a legitimate, recognized and concerned government. To the safety of the Yemeni environment and the Yemeni people and to fulfill its obligations towards international agreements related to environmental safety.

He pointed out that the government held several meetings at the regional level, within the framework of the Arab League, the Bersja Authority and with the countries bordering the Red Sea and the Gulf of Aden, with the aim of mobilizing regional and international support and funding for the United Nations plan, and to pressure the Houthis to stop blackmailing them and politicizing the tanker file and taking the necessary steps to avoid a disaster.

The Foreign Minister pointed out that the government agreed to implement the first phase of the emergency plan submitted by the United Nations and is keen to implement it without delay. He called for expediting the implementation of the process of saving the tanker and revealing any obstacles or blackmail practiced by the Houthi militias.

The Minister expressed his high appreciation for the efforts made by the United Nations and friends in the United States, the Netherlands and Germany. He also thanked all donor countries for their role in saving the marine environment before the disaster occurred. He reiterated the firm commitment of the Yemeni government to support and facilitate all initiatives aimed at ending the danger of the Safer tanker.