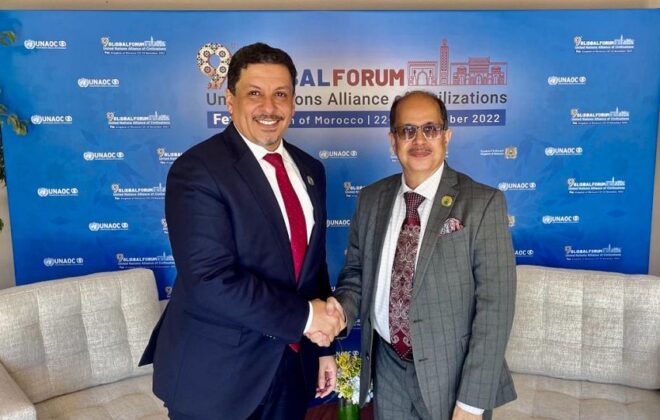 Fes – Saba
The Minister of Foreign Affairs, Dr. Ahmed Awad bin Mubarak, discussed with the Indian Deputy Foreign Minister, Dr. Awsaf Saeed, the bilateral relations between the two friendly countries and ways to enhance and develop them, on the sidelines of participation in the Ninth Global Forum of the United Nations Alliance of Civilizations.

Bin Mubarak noted the level of cooperation and coordination between the two countries in various issues of common interest and the importance of pushing relations to the required levels, especially in the academic and commercial fields, and granting more consular facilities.

He touched on the situation in Yemen in light of the escalation of the terrorist Houthi militia and its targeting of oil facilities in the cities of Hadramout and Shabwa, and the decision that was taken to classify the Houthi militia as a terrorist group.

For his part, the Indian Deputy Foreign Minister indicated his country’s hope for the return of peace, security and stability to all regions of Yemen, and to work to provide more support in the field of training and rehabilitation and to facilitate movement between the two countries.

Once again, the Indian government’s full support for the legitimate government and for the efforts of the United Nations aimed at achieving peace based on the agreed terms of reference.

The meeting was attended by the Yemeni ambassador to Morocco, Ezzeddine Al-Asbahi.