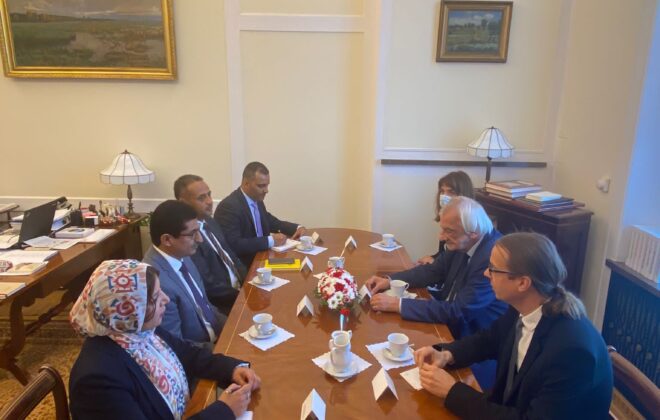 Bajjash confirmed that the government will continue to its efforts for peace and has made many concessions in past talks for the sake of peace and will continue efforts to realize it to meet people’s hopes and aspirations.

He pointed out to Houthi militia’s violations to International Humanitarian Law and threats against international security and peace.

He demanded polish parliament to adopt the position of the internationally recognized government and Yemeni people’s demands.

For his part, the Polish Vice Parliament confirmed his country’s firm position supporting Yemen’s unity, security and stability and support to efforts for realizing peace in Yemen.

He expressed readiness of the Polish Parliament to support the government and the people of Yemen.

السابق A Conversation with Ahmed Awad Bin Mubarak, Minister of Foreign and Expatriates Affairs of the Republic of Yemen. #IPI
اللاحق Al-Asbahi discusses with Moroccan diplomat latest developments in Yemen