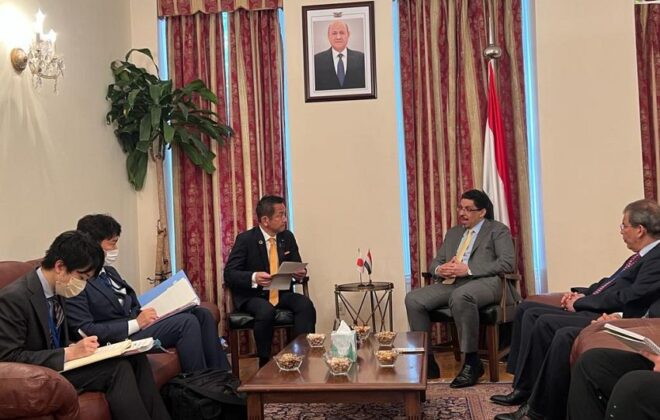 Minister bin Mubarak praised the distinguished and historical bilateral relations between the two friendly countries in various political, economic and development fields, expressing the Yemeni government’s appreciation for the support provided by Japan in order to mitigate the effects of the humanitarian crisis left by the Houthi militia’s war against the Yemeni people.

He appreciated Japan’s efforts to support the peace process in Yemen.

Bin Mubarak reviewed the latest political situation in Yemen and valued Japan’s support for the Presidential Leadership Council, stressing that the Council is working with all its energy to bring peace to Yemen by supporting the peace process led by the United Nations, referring to the concessions made by the government for the success of the armistice agreement despite all the obstacles by the Houthi militia.

He also called for putting pressure on the Houthi militias to complete the implementation of the truce agreement by lifting the siege they impose on Taiz governorate and alleviating the human suffering witnessed by the people of this governorate, and the need to dedicate the revenues of oil shipments coming to the port of Hodeidah for paying long unpaid salaries to public employees.

Bin Mubarak also touched on the food crisis that the world is witnessing, and its reflection on the food situation in Yemen, which has become more threatened than ever before to reach the brink of famine, calling on the Japanese side to provide assistance to Yemen in this regard to help it face challenges in providing food commodities, especially imports of wheat and in order to enhance food security in Yemen.