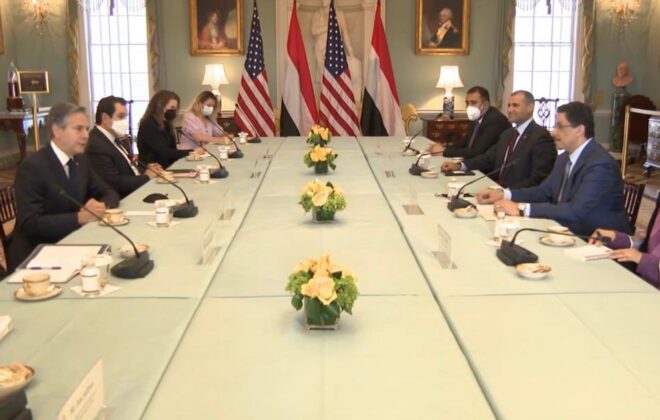 The discussions covered a range of topical issues of common interests including bilateral relations and cooperation between the two countries and latest developments in Yemen, mainly the underway efforts to establish peace in Yemen.

Bin Mubark praised the USA’s supportive stance in support of the Yemeni government and people, deeply appreciating the American substantial contribution to the humanitarian actions in Yemen.

He stated that the Yemeni government is looking forward to get greater economic support from the US administration so that it can manage the economic hardships it has been facing.

He detailed Mr. Blinken on the developments in Yemen, highly appreciating the US Administration’s efforts aiming to end the war, push peace in Yemen.

He confirmed the Yemeni government’s keenness to maintain the UN-brokered humanitarian truce and to fulfill its obligations under the truce agreement, citing re-operating airlines flights to Sana’a as an example of the government’s commitment to carry out its part to allievate the Yemeni peoples’ suffering.

Bin Mubarak noted that Houthi militias have continued to refuse fulfilling its obligations including lifting the besiege it has been imposing on the city of Taiz for more than seven years.

The Minister of Foreign Affairs and Expatriates called on the USA and UN to mount pressure upon Houthi militias to press for peace in Yemen.

For his part the US Secretary of State reiterated his administration’s commitment to work with the UN and international community to put an end of the war and establish peace in Yemen. He stressed that it is important to work for alleviating the humanitarian suffering of the whole Yemeni people.

Mr. Blinken reiterated the US Administration’s support for the Presidential Leadership Council and Yemen’s unity, security and stability.

The Yemeni Ambassador to Washington Mohammed al-Hadrami and the US Special Envoy to Yemen Timothy Lenderking contributed to the discussions.