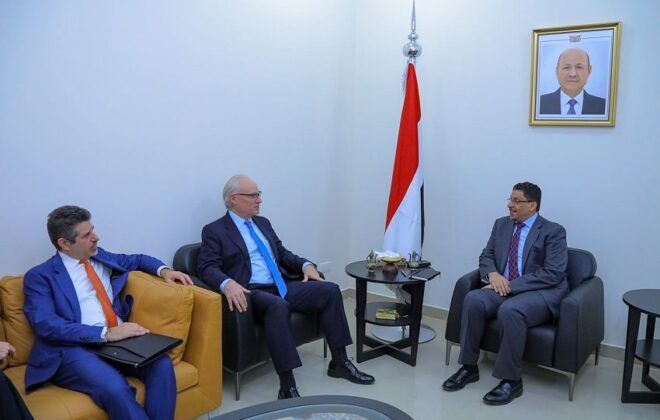 Aden – Saba
Foreign Minister, Dr. Ahmed Awad bin Mubarak, met today with the US envoy to Yemen, Tim Linderking, and discussed with him the latest developments and efforts exerted to achieve peace in Yemen according to the agreed terms of reference.

During the meeting, the Foreign Minister stressed the importance of implementing all the provisions of the UN truce, and the need to open the crossings in the city of Taiz and the rest of the governorates, pointing to the Houthi militia’s continued violation of the truce and its failure to implement its provisions.

He stressed that the Yemeni government deals positively with all the United Nations proposals, in order to alleviate the suffering of its people, stressing at the same time that the Taiz issue is one of the major humanitarian issues that must be dealt with and resolved before moving on to any other issues.