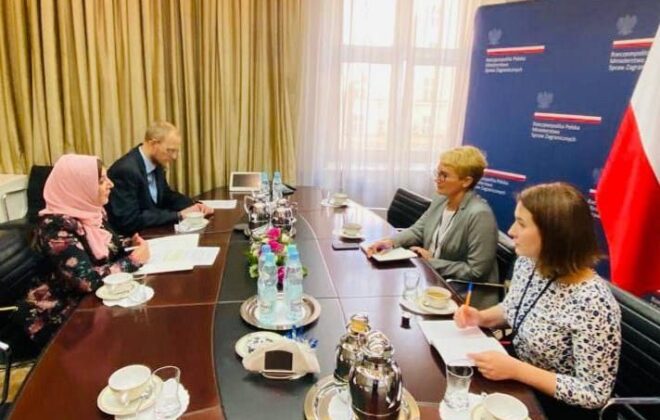 Warsaw – Saba
Today, the Ambassador of Yemen in Warsaw, Mervat Magali, discussed with the Head of the Middle East and North Africa Department in the Polish Foreign Ministry, Patricia Ozcan, the latest developments in Yemen in light of the UN armistice.

Ambassador Majali explained that the Houthi coup militias are still violating the terms of the truce and not adhering to the agreed points, and that the Yemeni government has dealt primarily with responsibility towards the Yemeni people, and has supported the efforts of the UN envoy to Yemen and announced its agreement to extend the truce for the third time on August 1, 2022 and for a period of two months. .

She said, “The terms of the truce agreement, since it was agreed upon in April 2022, included opening flights from Sanaa airport and facilitating the entry of fuel ships to the port of Hodeidah, in return for the supply of funds from the Houthi militia to a special account for salaries under the supervision of the envoy’s office, which has not happened so far. Indeed, one of the most important provisions of the truce in alleviating human suffering is the necessity of opening the roads leading to the besieged city of Taiz and lifting the militia’s siege on the city.

However, they did not abide by the terms of the truce, and even intensified their attack on a number of cities and camps, which have claimed 1,097 dead and nearly 910 wounded. “.

The Polish official indicated that they and their partners in the European Union are closely monitoring the situation in Yemen and thank the Yemeni government for accepting the extension of the truce for the third time with the aim of essentially alleviating the suffering of civilians, reducing the fighting and exhausting the Yemeni economy, and that they will work by all means to pressure the Houthi militias to abide by the truce agreement.