The session aimed to discuss the latest developments about peace process in Yemen. Conversations also touched upon bilateral ties and cooperation between the two friendly countries. 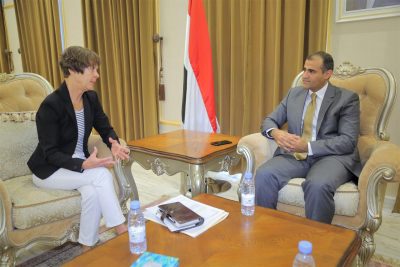 The Minister has made it clear that going to new round of consultations without the implementation of Hodeidah will encourage Houthi militia not to deliver on its commitments.

He also stated that the government is sincerely seeking for a permanent and comprehensive peace but not the temporary and unrealistic one.

Concerning to the Yemeni-German bilateral cooperation, Al-Hadarami highly appreciated Germany’s support to Yemen including the training of Yemeni diplomatic cadres.

For her part, the German diplomat reiterated her country’s support for the legitimate government and Yemen’s unity, security and stability.