MOSCOW – SABA
Yemen’s ambassador to Russia, Dr. Ahmed Salem Al-Wuhaishi, met today with the representative of the envoy of the Russian President for the Middle East and North Africa Mr. Mikhail Baghdanov

They reviewed political developments in Yemen in light of the Saudi peace initiative and international efforts, including Russia, to help bring peace to Yemen.

The ambassador reiterated the Yemeni government’s welcome to the Saudi initiative and its keenness to end the war and achieve peace based on the terms of references represented by the GCC Initiative, the outcomes of the National Dialogue and UN Security Council Resolution 2216.

He said that the Houthi militia are however persistent in their escalated war on Marib and attacking the IDPs.

He said that the environment and shipping in the Red Sea are endangered by the Houthi militia’s continued denial of international technicians access to the dangerously decaying Safir oil tanker to carry out some maintenance on it. 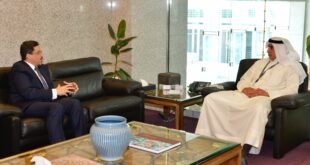