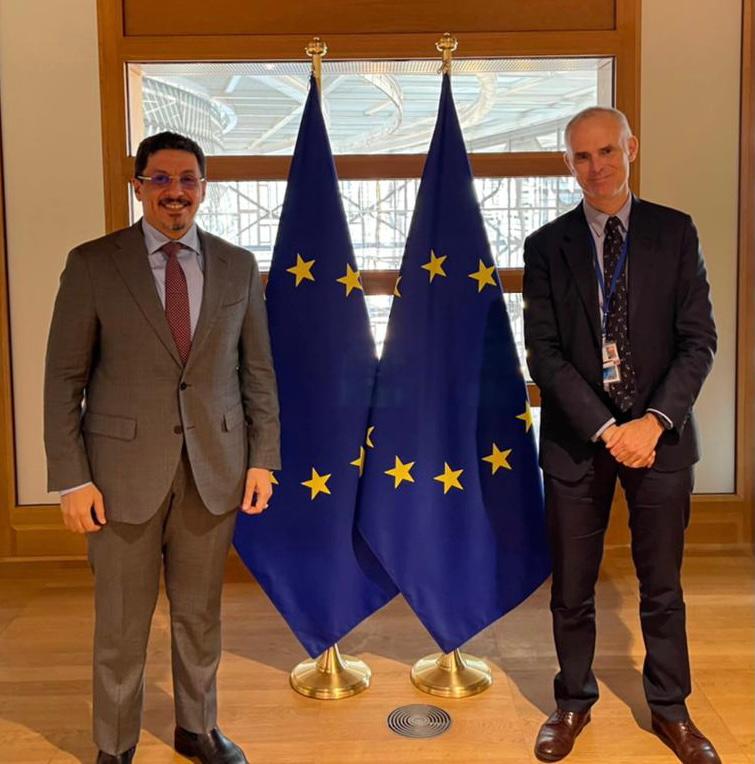 Minister of Foreign Affairs and Expatriates Ahmad Bin Mubarak discussed Wednesday with the Chief’s Foreign Policy Advisor to the President of the European Council Simon Mordue peace efforts and latest developments in Yemen.

Bin Mubarak said that the only way for peace is ending Houthi militia’s triggered war, pointing out to government’s efforts for reaching inclusive ceasefire.

He confirmed government’s positive involvement in all international initiatives and efforts for reaching a political solution on the bases of the three internationally agreed upon references.

He made it clear that Houthi militia’s rejection to peace is the real obstacle for accomplishing any positive progress despite all concessions made by the government, confirming that Houthi militia military escalation and rejection of all initiatives for inclusive ceasefire is the prime reason of the humanitarian crisis in Yemen.

Praising efforts of the UN to peace process, Bin Mubarak pointed out to significance of exerting more pressure on Houthi militia to stop violence and targeting civilians.

For his part, the European official talked about efforts exerted by the EU for supporting peace process, confirming that there is no military solution to Yemen’s conflict as prolonging the war complicates humanitarian disaster.

He renewed support of the EU for political process and humanitarian response plan, confirming EU’s support to internationally recognized government and to Yemen’s unity, security and stability.