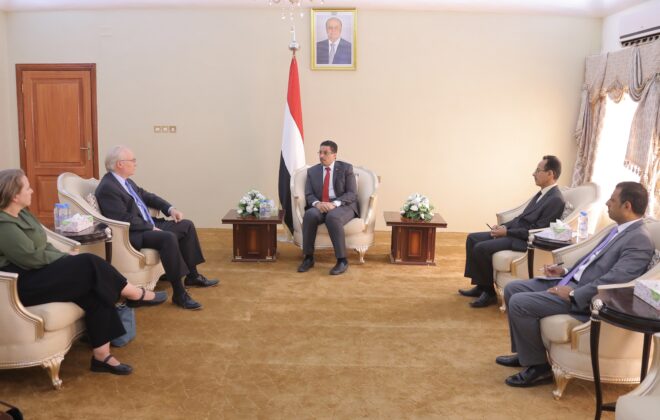 Bin Mubarak to Lenderking: Houthi militia only believes in violence

ADEN-SABA
Minister of Foreign Affairs and Expatriates Dr. Ahmed Bin Mubarak held talks today with the US Envoy to Yemen Timothy Lenderking and Charged’ Affairs of American embassy in Yemen Kathy Westly over the ongoing efforts to stop war and establish peace.

He restated that the government has always been keen to make peace as this is the only option for Yemen to get out of current dilemma.

He blamed Houthi militia for prolonging the conflict, worsening humanitarian crisis by rejecting all peace proposals.
He said ” Houthi militia’s current military operations on Marib, SHabwa, Taiz and others have proved to the Yemeni peoples that this militia doesn’t want peace, only believes in violence and terrorism”.

The US diplomat reiterated his administration’s full support for the Yemeni official government, asserting the importance of getting Riyadh Agreement fully implemented.

He stated that the USA is continuing to support the efforts to end the war, establish peace in Yemen.