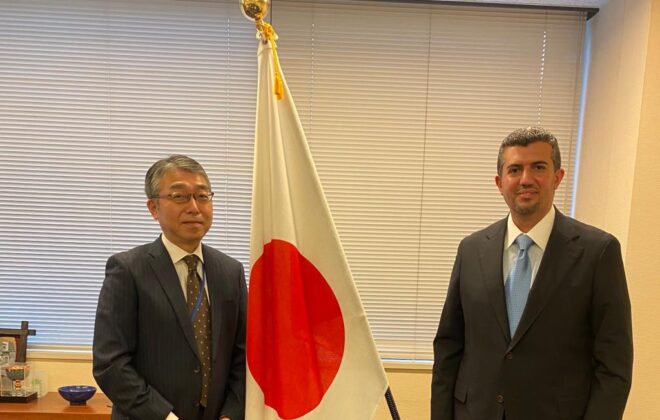 Tokyo – Saba
The Chargé d’Affairs of the Yemeni Embassy in Tokyo, Bashir Qassem, discussed with the Japanese Assistant Foreign Minister and Director General of Middle East and African Affairs at the Ministry, Ambassador Nagaoka Kansuke, ways to strengthen and develop bilateral relations between the two countries in various fields.

The Chargé d’Affairs reviewed the developments of the situation in Yemen, including the formation of the Presidential Leadership Council.. He pointed out that the Council seeks to end the war and establish a comprehensive, lasting and just peace.

He pointed out the commitment of the legitimate government to the UN truce despite the Houthi coup militia’s failure to adhere to any of its pledges and continues to attack civilians in various Yemeni cities, mobilizes its fighters and war equipment around some cities, and refrains from naming its representatives in the special committee to open the crossings that besiege civilians in the city of Taiz.

Qassem touched on the sabotage role played by the Iranian regime by providing support and assistance by various means to the Houthi coup militias.