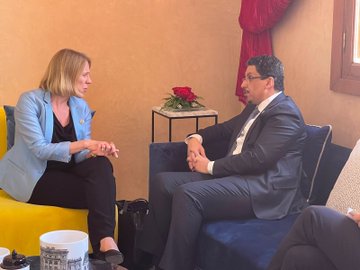 Marrakesh – Saba
Foreign Minister, Dr. Ahmed Awad bin Mubarak met with his Norwegian counterpart on the sidelines of participating in the meeting of the International Coalition to Defeat ISIS, in the Moroccan city of Marrakesh.

Bin Mubarak reviewed the latest developments in our country, especially those related to the cessation of military operations for a period of two months and the importance of working to extend it as an entry point to stop the war and start the peace process.

He also touched on efforts to lift the siege on the city of Taiz and operate flights to Sana’a Airport, as well as paying employees’ salaries from the financial revenues to enter oil derivatives to the port of Hodeidah, explaining the government’s efforts and solutions and initiatives offered in this regard… stressing the importance of intensifying international pressure on the Houthi militia and their supporters to positively interact with regional and international peace efforts.