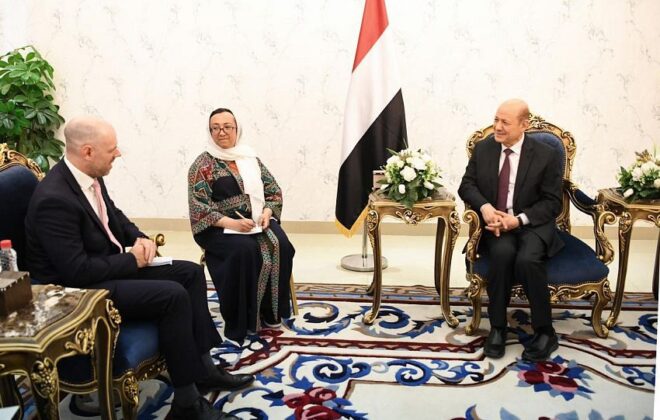 ADEN-SABA
President of the Presidential Council Rashad al-Alimi received Monday here UK Ambassador to Yemen Richard Oppenheim, who convoyed a written congratulation from Queen of the United Kingdom Elizabeth the Second on the 32nd of the National Day.

President al-Alimi expressed great thanks and gratitude to Queen Elizabeth, British People and for the UK support for realizing peace and stability in Yemen.

He pointed out to efforts of the Presidential Leadership Council in different domains, including expected reforms in the military and security institutions and fighting terrorism, in addition to economic, service and justice files.

He confirmed significance of mobilizing support to realize reforms adopted by the Presidential Council and the government, especially in fields of improving services in liberated provinces led by the transitional capital of Aden.

The meeting also discussed needed measures to extend the truce under Houthi militia’s stubbornness and rejection of honoring its commitments in the truce.

President al-Alimi and members of the presidential council confirmed importance of exerting pressure on Houthi militia by international community and UK to push the armed group to implement its commitments regarding opening outlets of Taiz and other provinces and to pay salaries of government employees from fees taken from ships carrying fuel.