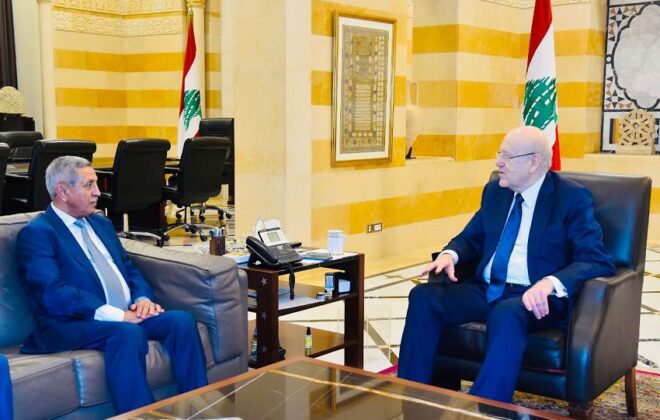 At the beginning of the meeting, Ambassador Al-Deais conveyed to the Lebanese President through his prime minister the good wishes of Yemen’s Prime Minister Dr. Moeen Abdul-Malik, on the occasion of the success of the electoral process that took place to elect members of Parliament in Lebanon, and his wishes that this would be the beginning of addressing the problems and economic and living crises facing Lebanon, and the restoration of development and stability in Lebanon.

Yemen’s ambassador reviewed the latest developments on the Yemeni arena, represented by the smooth transfer of power and the assumption by the Presidential Leadership Council headed by His Excellency Dr. Rashad Muhammad Al-Alimi, Chairman of the Presidential Leadership Council and members of the Council, the reins of power and the return of the Council and the government to exercise its functions from the temporary capital Aden, which among its priorities is the pursuit of security and peace and addressing economic problems In our country, despite the many difficulties created by the Houthi militias, which usually evade peace.

Ambassador Al-Daeis touched on the Yemeni government’s response and its keenness for the success of the truce announced by the envoy of the Secretary-General of the United Nations to Yemen, and its efforts to transform the truce into a permanent ceasefire through its commitment to all the provisions stipulated in it.