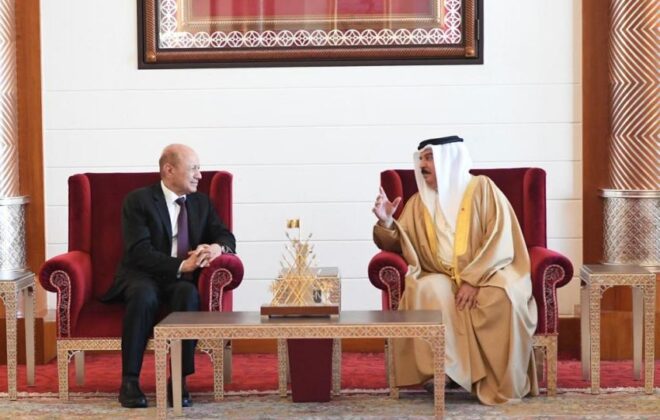 He reviewed latest developments in Yemen and challenges facing the Presidential Leadership Council in different domains, especially in economic, service and security fields.

The president said he and the council have determined to regain the state institutions and work from inside Yemen to normalize conditions with support from Arab Coalition led by Saudi Arabia and the United Arab Emirates.

He confirmed commitment of the Presidential Council to peace choice in accordance with the national, regional and international references despite Iran-backed Houthi militia’s rejection to all positive efforts in this field, including initiative adopted by Saudi Arabia to end suffering of Yemeni people and realizing peace and stability in the country.

For his part, King of Bahrain expressed his admiration of Yemen and its old history and of Yemeni people’s heroic survival in facing dangers and failing sabotage and conspiring plots targeting the regional security and stability.

He also expressed confidence of the Presidential Leadership Council in realizing aspirations of Yemeni people and its sacrifices for the sake of peace, stability and regaining its presence in regional and international family.

King of Bahrain confirmed his country’s firm position and his full support to Yemen’s complete membership in the Gulf Cooperation Council due to geographic linking and joint history with countries of the council.

He stressed significance of boosting cooperation with the Yemeni leadership and government and exchanging visits between the two parties to serve interests of the two brotherly countries.