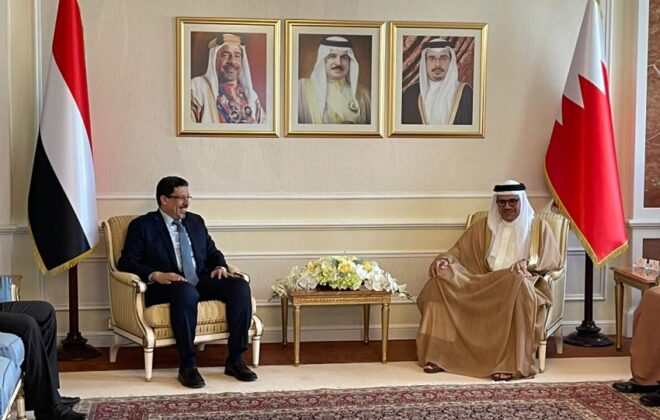 MANAMA-SABA
Minister of Foreign Affairs and Expatriates Dr. Ahmed Bin Mubarak met today with Bahraini Foreign Minister Dr. Abdullatif Azyani on the sideline of the visit of the Chairman of Presidential Leadership Council (PLC) and his accompanying delegation to the Kingdom of Bahrain.

Yemeni-Bahrain bilateral ties and latest developments in Yemen was key point of the conversations.

Bin Mubark praised the supportive stances of the Kingdom of Bahrain in support of the Yemeni legitimate government, appreciated its active contribution to the efforts of Saudi-led Arab Coalition to restore the stat, eliminate Houthi militia’s coup.

For his part, the Bahrain Foreign Minister welcomed the visit of the Chairman of the PLC and his accompanying delegation to Manama, reiterating Bahrain’s support for the PLC, Yemen’s unity, security, stability and its territorial integrity as well as all regional and international efforts to make peace, end the war in accordance with the agreed on three terms of peace reference.