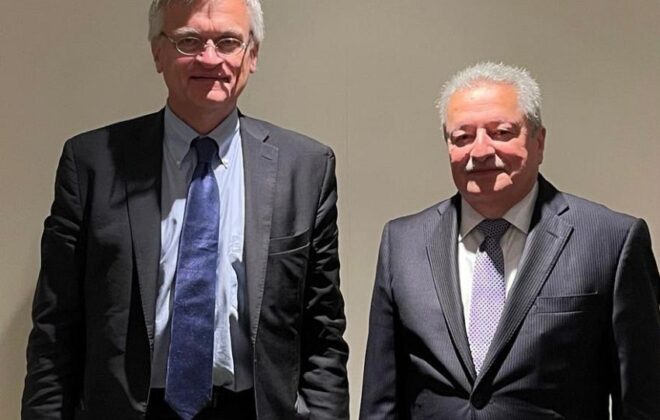 Brussels – Saba
The head of our country’s mission to the European Union, Ambassador Mohamed Taha Mustafa, met at the mission headquarters in the Belgian capital, Brussels, Sweden’s envoy to our country, Ambassador Peter Semneby.

In the meeting, Ambassador Mustafa reviewed the latest developments in the situation and efforts to bring peace in light of the Houthi militia’s continued intransigence and refusal to respond to all previous and current initiatives, and their failure to adhere to what has been agreed upon with them since the Stockholm Agreement, and their continuation in the siege of Taiz and the repeated attacks on them, on Hodeidah and Marib, which led to the death and wounding of ozens of citizens and army members.

He called on the envoy, and through him, the European Union countries to put pressure on the Houthis and their supporters in Tehran.

In turn, the Swedish envoy referred to his mission within the framework of the international effort by the UN envoy to extend the truce for a longer period in order to facilitate more relief from the suffering of the Yemenis, stressing the support of Sweden and the European Union to the UN envoy and their appreciation for the initiative of His Excellency President Dr. Rashad Al-Alimi to approve the entry of more oil products.