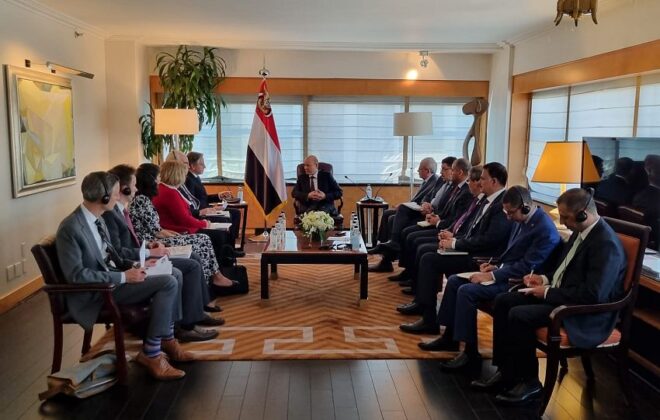 President of PLC discusses with US FM latest developments in Yemen

NEW YORK – SABA
President of the Presidential Leadership Council Rashad al-Alimi received Monday in his residence here US Foreign Minister Antony Blinken on the sidelines of his participation in the meetings of the General Assembly of the United Nations.

The two partied discussed latest developments of the Yemeni file and US efforts in coordination with the United Nations and the International Community to extend the humanitarian truce under Houthi militia’s continuous violations.

President al-Alimi praised mutual relations between Yemen and the United States and the US position supporting the constitutional legitimacy in different international forums.

He also highly appreciated US humanitarian interventions to alleviate suffering of the Yemeni people, which exceeded USD one billion this year as the greatest donor of the UN Humanitarian Response Plan in Yemen.

He confirmed firmed position of the Presidential Council and the government towards prime issues in the file of peace and current truce, pointing out to necessity of obligating Houthi militia to open roads of Taiz and other provinces, pays salaries of the government employees from the revenues from Hodeida Port, releasing all prisoners and kidnapped people and ending practices of hindering solutions to Safir Oil Tanker.

For his part, the US Foreign Minister expressed support of Washington to the Presidential Leadership Council and to the government and to their efforts of the economic and services reforms.

Blinken also praised positive dealing by the council and the government with the UN efforts for tightening the truce and reviving peace track in Yemen, including exceptional decisions of allowing arrival of fuel to Hodeida Port.