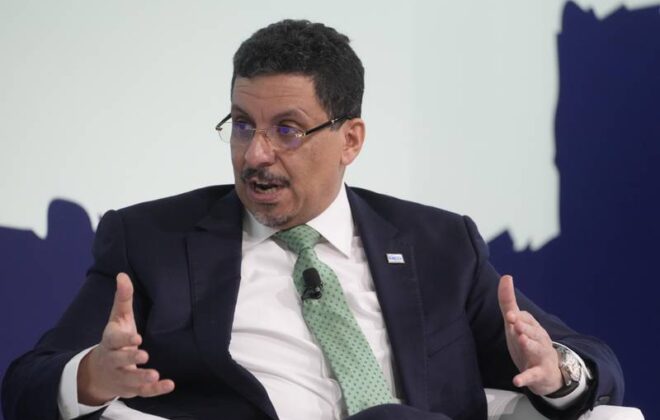 The Iran-backed rebels rejected efforts by the UN’s special envoy for Yemen, Hans Grundberg, to extend the ceasefire with the internationally-recognised government for a further six months before it expired in early October. Mr Grundberg had also proposed broadening the scope of the agreement.

“We cannot understand the Houthi stance towards the truce without the link to Iran’s internal affairs,” Mr bin Mubarak said on the sidelines of the Manama Dialogue in Bahrain.

Iran has been rocked by nationwide anti-government protests since mid-September that show no signs of ending despite a bloody crackdown.

“So the Iranians are trying to use the Houthis as one of the cards they have and this is one of the main reasons why the Houthis are taking such a difficult position,” the foreign minister said.
He said the Yemeni government was expecting the rebels to agree to a renewal of the UN-brokered truce that began on April 2 and was extended twice for two-month periods.

“For me, Iran will never lose the cards of its militias in all these countries and they will keep using them. The Houthis are one of these cards, and with very little investment they are gaining a lot,” he said.

The Houthis stormed the capital, Sanaa, in 2014, ousting the government and triggering a civil war that has created one of the world’s worst humanitarian crises.

Tehran has said it supports the Houthis politically but denies sending the group weapons, contrary to evidence found by international investigations.

Mr bin Mubarak said Yemen was going through a “period of no war, no peace” and that the rebels had started to target the government’s economic resources, mainly oil vessels and facilities.

“This is a really serious escalation by the Houthis. The consequences of such attacks will impact the Yemeni people negatively,” he said. “Now everyone is watching and waiting.”

He said there was no “serious work” to exert pressure on the Houthis and on Iran.

The minister said the Houthis’ actions posed a grave danger to global energy sources and international shipping lanes.
“Establishing peace in Yemen is a basic guarantee for navigation and the security of the region,” he said.

The government is trying to obtain peace as fast as possible because “Yemenis have had enough suffering”.

“Despite all that the Houthis did, we are still inviting them to be a part of Yemen’s future, but they just need to respect one constitutional principle which is that all Yemenis are equal.”

Iran’s interference is a red line, said the minister, otherwise the government is “ready to accept everything”.

For peace to be achieved, the international community must have a proper understanding about the nature of Yemen’s conflict and they must show their determination, he said.

The minister called for more investment and funding to help government institutions to serve the public.

“The international community must support the Yemeni government by setting them up politically and economically, especially in liberated areas,” he said.

“For the last few years, the international community has dealt with Yemen from a humanitarian perspective, but they are not dealing with the cause of the problem — this is the Houthi militias,” he said.