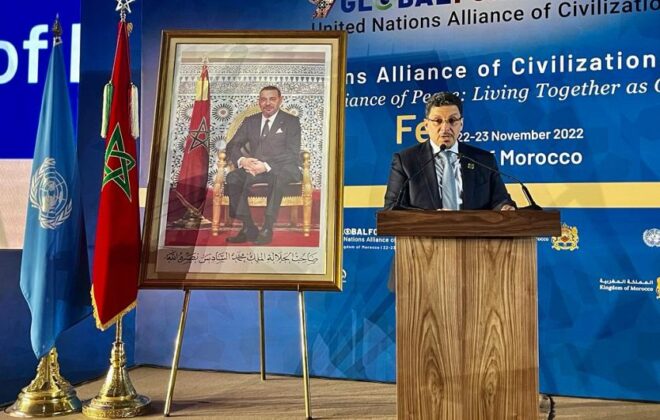 Fez – Saba
The Minister of Foreign Affairs, Dr. Ahmed Awad bin Mubarak, called on the member states of the Ninth Global Forum of the United Nations Alliance of Civilizations, held in the Moroccan city of Fez, to label the Houthi militia as a terrorist group, not to allow it to continue its war against the Yemeni people, and use the war as a means to confiscate Yemen’s future and tear apart its social fabric and distort its deep-rooted history.

In his speech delivered today at the forum, the Minister of Foreign Affairs also called for supporting the government and its decisions aimed at establishing peace, achieving security and stability, and building a single state that accommodates all its people and guarantees them the future they aspire to.

The Minister of Foreign Affairs noted the importance of this important international event, which is based on dialogue, cooperation and integration between different cultures and religions, aspiring through it to enhance dialogue and peace efforts in all parts of the world, and to reject and condemn the rhetoric of hostility and hatred and the causes of division among peoples.

He drew attention to the great historical heritage that the Republic of Yemen abounds in and extends for thousands of years, through which Yemen provided an example to follow for coexistence and harmony between different races, cultures and religions, to be thus one of the pillars of human civilization that had an ample share in the course of human development.