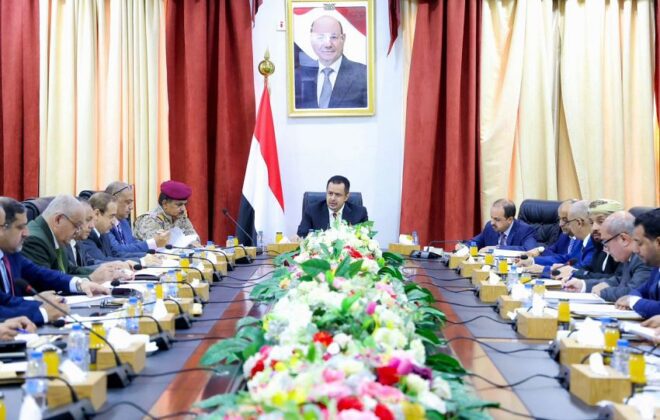 The council approved a number of military, security and intelligence’s decisions to face this terrorist escalation by the militia to protect interests of Yemeni people and safety of international navigation and international trade, confirming coordination with Yemen’s partners in fighting terrorism led by brothers in Arab Coalition led by Saudi Arabia and the United Arab Emirates to implement these decisions.

The council stressed the government will not tolerate Houthi militia’s terrorist attacks to stop activities of economic establishments to harm millions of Yemeni people, pointing out that the terrorist militia is writing its end by killing Yemeni people, making them starve and destroying their economy.

Prime Minister made it clear that the government-through its repeated calls to international community to designate Houthi militia a terrorist group- is aware that these terrorist group will not surrender to political solution and has a history of breaching agreements.

He confirmed that the government understands its priorities and will not stay idle in facing the terrorist acts by Houthi militia against civilians and economic establishments and will seriously face any danger against the national economy and livelihoods of citizens.

He stressed that the war for regaining the state and ending Houthi militia’s coup against the state with support from Iran is continuing “not because we want war but because they impose it against us” and suffering of Yemeni people will end only by eradicating the terrorist infrastructure of this raciest militia.

He pointed out that all Yemeni people, leadership, government, army and people are continuing their battle to end Houthi militia’s coup and are determined more than before to regain the state and rebuild the country better than the past.