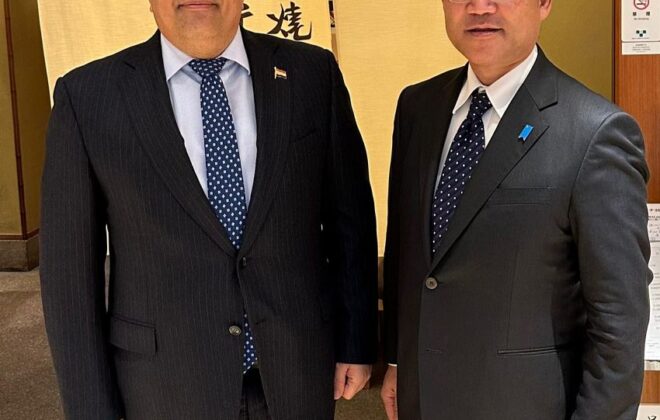 Ambassador of Yemen to Japan discusses with a Japanese official way to enhance bilateral relations.

Tokyo – Saba
The Yemeni Ambassador to Japan, Adel Al-Sunaini, discussed with the Chief of Protocol at the Japanese Ministry of Foreign Affairs ways to enhance and develop bilateral relations between the two friendly countries.

Ambassador Al-Sunaini reviewed the developments of the situation in our country.. once again the keenness of the Presidential Leadership Council and the government to reach a sustainable political solution that ends the suffering of the Yemeni people, based on the three references represented in the Gulf initiative, the outcomes of the national dialogue and the relevant UN Security Council resolutions.

Al-Sunaini praised the advanced cooperation and coordination between the embassy, the Protocol Department and the protocol, which reflected positively on strengthening relations and serving the interests of the two friendly countries. For his part, the Japanese official stressed the strengthening of fruitful cooperation and coordination between the two friendly countries, pointing to Japan’s position in support of a permanent political solution in Yemen, noting Japan’s keenness to restore peace to Yemen and end the suffering of the Yemeni people.