NY-SABA
Yemen welcomed on Wednesday the UN Security Council’s resolution no. (2452) to deploy personnel for monitoring the ceasefire and redeployment terms of the Stockholm Agreement in Hodeidah 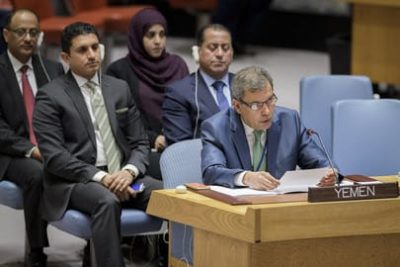 Yemen’s permanent representative to the UN Abdullah al-Saaditold the UNSC session of Wednesday that the government is keen on securing a comprehensive and lasting peace. He said that this kind of peace is the one based on the three agreed upon terms of reference; the GCC Initiative, the outcomes of the National Dialogue and the UNSC relevant resolutions mainly resolution 2216.

He called on the UNSC and the whole international community to monitor the breaches which Houthis have been committing to hinder the implementation of the Stockholm Agreement.

“Since the ceasefire came into effect on December 19, 2018 until the current January, the Houthis committed 573 violations that led to the killing and injury of 41 persons,” he said. He called on the UNSC to take its responsibility and to condemn these breaches for they put the Stockholm Agreement at stake.

He also called on the UNSC to force the rebel militia to comply with the UNSC resolution 2216. He condemned the latest terror attack the militia carried out by attacking al-Anad airbase with a drone.