In a meeting the King and senior other Saudi officials including the Interior Minister held with Yemen’s President Abd-Rabbu Mansour Hadi and senior other Yemeni officials including the Vice President, the King affirmed that he stands by the side of Yemen and rejects whatever threatens Yemen’s unity and social fabric mainly the acts of the separatist council. 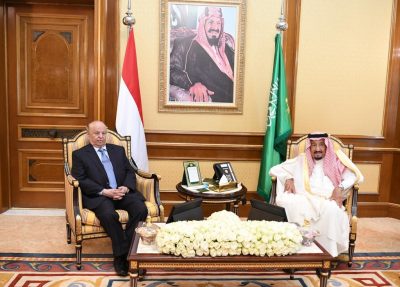 The council had seized most of Aden after mounting a two-day assault that ended on Saturday with the capturing of the government’s military camps and civilian institutions.

Hadi expressed appreciation of the Saudi brotherly support to Yemen by rejecting the coup against the state institutions.

He said the Saudi support shows the love, fraternity and the principle of shared destiny that bind Yemen with the Kingdom, in the face of the Iranian agenda and destabilizing arms in the country’s north and south.